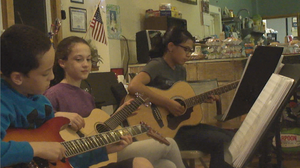 In case you missed it last Thursday, we had an Open House Event where many of our students performed.  This was our biggest turnout for an Open House, which was hard to imagine considering our turnout at our last Open House!

Kicking it off was our very own Guitar Squad (pictured) with students Zoe Saldana, Matthew Egan and Sophia Egan performing three popular songs instrumentally  ("Happy", "We are Never Ever Getting Back Together" and "Demon").  We then had Sophia Egan perform an inspiring singing version on guitar of "Let It Go" from the movie Frozen.  Followed by that was Samantha Schulz playing and singing her own beautiful original song "This Love."

We then had three students (Warren R. Callen, Ben Miller and Gus Angulo) from our Kids Rock Guitar program perform a special arrangement of "Carry On (Wayward Son)" by Kansas.  Afterwards, we then had a big jam session with several of our students performing including Ben Chaco and Assistant Guitar Instructor Matt Hamer.  Then at the end of the show, Warren Callen (Warren R. Callen's dad) performed "Is There Anybody Out There" by Pink Floyd.

Video footage was taken of the event and is available on our Media tab here on this website!