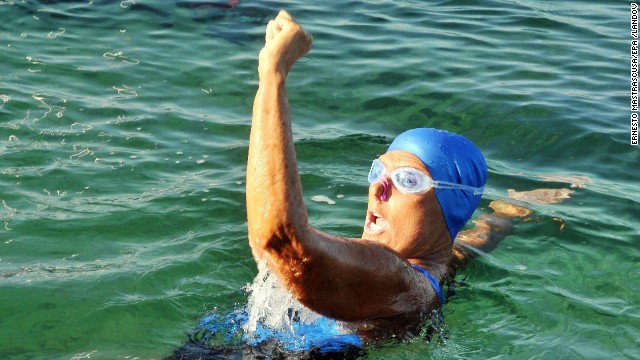 This week’s article was going to be more guitar specific, but with Diana Nyad’s inspiring solo swim from Cuba to Florida over this past weekend, we couldn’t help but include it in this week’s RCGS article. What she did touches on all of the concepts that we’ve had in the recent articles here at the school – Perseverance, Dedication, Confidence, Goal Setting, Being Positive and Practice. Her achievement, despite the daunting distance of more than 100 miles and four prior failed attempts, stands as a testament to us all that we can make our dreams come true.

This weekend was Diana’s fifth attempt at this swim in the past 35 years and she is now 64 years old. In past attempts, she had to stop due to fatigue, lightning storms, jellyfish attacks, rough seas, and an asthma attack. In this weekend’s monumental effort, she kept telling herself, "You don't like it. It's not doing well. Find a way."
When she arrived on the sandy Florida beach after nearly 53 hours of straight swimming, she said “I got three messages: one is we should never, ever give up. Two is you never are too old to chase your dreams. Three is it looks like a solitary sport, but it's a team.”

Later, she told CNN: “It's all authentic. It's a great story. You have a dream 35 years ago -- doesn't come to fruition, but you move on with life. But it's somewhere back there. Then you turn 60, and your mom just dies, and you're looking for something. And the dream comes waking out of your imagination.”

What does this mean to us? Diana’s example shows us that no matter how daunting the task or goal that we have setup for ourselves, if we overcome our fear, our doubts, we keep trying and are stubborn and continue despite these obstacles, that we will eventually achieve our goals.

Diana notes during this weekend’s swim that “It was really rough that first day, Saturday, after the start and I just said: 'Forget about the surface up. Get your hands in somehow, and with your left hand, say, push Cuba back, and push Florida towards you.'” What does this show us? While the end goal was still in her mind, she was really focusing on the task at hand, which was completing one stroke at a time. Only in this case, about a 100,000 of them.

One quote in the interview that she said that rings true is, “I think that a lot of people in our country have gotten depressed, pinned in, pinned down with living lives they don't want.” Turning this statement around and pointing it at ourselves, it means that many of us have given up on the dreams that we had as children and have just succumbed to daily living. We’ve given up on those special things that we always wanted to do.

We must use Diana’s inspiration as a beacon to us all that we can still do the things that we always wanted to do. We CAN do it – make a plan, set goal dates, build a support network around us, feed our minds with the positive and work stubbornly at the task EVERY day and we will see our dreams come true. Just ask Diana Nyad, she can tell you.